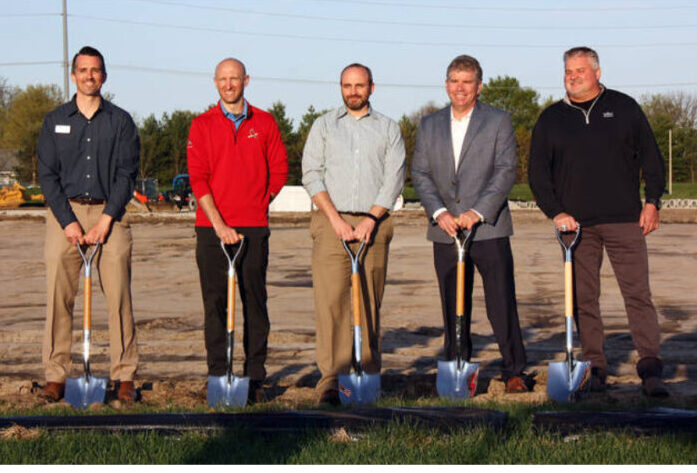 About 100 people attended the ceremonial groundbreaking for the RP Lumber Center ice rink and teen center Tuesday.
It was ceremonial because the ground’s already been broken after earthwor1< began two weeks ago. The site is located at 11ger Drive and Governors’ Par1<way, near Edwardsville High School. City officials postponed the original groundbreaking in late March due to expected severe weather.
For Mayor Hal Patton, this is a capstone on his eight years as mayor. During his remarks, he outlined the project’s genesis and the roadblocks that kept popping up over the past decade – red tape in Springfield, the unanticipated death of a major sponsor and the COVID-19 pandemic.
Patton asked how many in attendance for a show of hands as to how many people ever thought this day would acme. He was pleased to note the total was more than he expected. He said he was detennined to do this project for three reasons – the city, for the 11gers hockey organization and for the sport of hockey.
“This is a city that I grew up in and a city that I love and where I’ve been honored to be mayor for eight years,” he said. He noted that the high school team headed to nationals in Omaha, Nebraska on April 14. “I didn’t have an opportunity to play hockey right out of the gate; I played all of the traditional ones, soocer, baseball then I got into golf,” he said. “Once I first stepped on a [frozen] pond, it was the greatest experience to be able to skate on the ice and to play as an individual and as a team­mate. I aculdn’t get enough of it after I started.”
Patton acnsiders par1<s to be the heart and soul of a acmmunity and he had a mission to improve the city’s parks after elected. RP Lumber Center is the final piece of the city’s “Better Place to Play” initiative, which started with the splash pad in Leon Corlew Park in 2016 and the Plummer Family Sports Part< in 2020 with four base­ball/softball diamonds, six soocer/lacrosse/football fields and 12 pickleball acurts. He said there are also 218 acres of new active and passive greenspace, or 2.5 times more than the city had during its first 200 years.
Among the other groups and people, Patton’s thanks included the village of Glen Carbon, who unanimously approved donating $1 million to the project. Patton said there are stories and rumors about the city and village acmpeting and not getting along. “I’ve aM1ays said, we share the same school district, we share the same busi­nesses and we frequent each other’s acmmunities all the time.” When the facility opens, Patton requested a 7 on the home side of the sacreboard and a O on the visi­tors’ side to represent the city acuncil’s unanimous vote to approve this project.
Besides Patton, other speakers included Michael Chiodini, principal and project director for Chiodini Architects, fonner St. Louis Blues hockey player Kelly Chase and Robert Plummer The Edwardsville High School 11gers hockey team also attended.
Chiodini said it’s been an honor to work with the city. He mentioned Chase, who now helps design hockey rink facilities.”He acmes in and wants to play architect all the time; sometimes I have to kick him out,” Chiodini said.”Just with crayons,” Chase interjected a quip. Chiodini said of all the things Patton aoocmplished during his tenure as mayor, the center is the crown jewel. “Art? Where are you?” Chiodini called out to Mayor-elect Art Risavy, who was in attendance. “You have some big shoes to fill and I know you can do it. “Hal when you first awarded this project to us, I said three things: I would bring it on time, in budget and it will exceed your expec­tations,” Chiodini summed up. Chase said his hometown in Canada did the same thing Edwardsville is doing – built a acmmunity ice rink. “The one thing I know about these rinks is that they bring a acmmunity together,” Chase said.
Robert Plummer praised Patton for the things he has done for Edwardsville and for the city acuncil’s support along with city staff employees. “Man, Mayor Patton. I’m telling you, I did everything but beat him to a pulp to try to get him to run for a third tenn,” Plummer joked.He mentioned the other facility that bears his name, the sports part<, where people are out playing baseball, softball, soocer and pickleball. ‘We do have a acuple of hotels in town and it’s amazing how many people acme in and they shop, and they spend money and they stay, and they participate in different things in town,” Plummer said. He thinks the sport part< has helped.
“We’re all blessed to live in a great, great, great town,” he said. Plummer is a minority owner of the Los Angeles Dodgers baseball team and he said he just returned from the Dodgers’ home opener”LAs a great acmmunity but they’re not just as nice as a Midwest acmmunity; the people there are really nice, but Midwest people are just really good people, down-to-earth, Smalltown USA.”
Patton summed up the event with an infonnal timeline. He pointed out the future par1<ing lots and where a future seacnd rink would go, if approved and funded. A large machine has been wor1<ing to install footings for the building, which will be poured next week and if the weather acoperates, by Memorial Day, exterior walls should go up. A bike trail acnnection will be acmpleted thanks to the Metro East Par1<s and Recreation District.
The RP Lumber Center, which will be located off of Governors’ Par1<way and 11ger Drive on District 7 grounds, has a scheduled ribbon-cutting in May 2022.